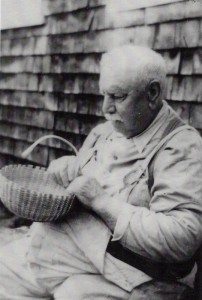 A house painter by trade, Ferdinand Sylvaro was a Nantucket native of Portuguese decent and married a woman named Althea Macy (not to be confused with scrimshander Aletha Macy) Ferdinand Sylvaro worked from his shop that was attached to his home, on 97 Orange Street. He was among the “on land” weavers who made baskets in the 1920s. Research suggests that his neighbor, AD Williams, taught him the craft of weaving Nantucket lightship baskets. AD Williams was taught by William D. Appleton.

You will find that Ferdinand typically used oak or hickory for the staves, and mahogany for the bases. One of his trademarks was inscribing three narrow, equally spaced circles incised inside of the bottom of the base. His baskets are labeled with a paper label that reads “Ferdinand Sylvaro, 97 Orange Street, Nantucket, Mass.”