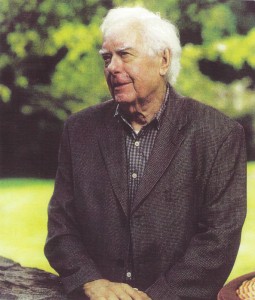 Harry Hilbert grew up in Stamford Connecticut, where his father owned an antique shop, and at age 16 Harry found work at a local auction house as an errand boy and helpful hand. In 1936 at age 19, with his brother he opened an antique shop, Hilbert Brothers Antiques on New Canaan’s Main Street. The shop prospered for 44 years, closing in 1980 not long after the death of his brother, Valdemar Hilbert.

Harry Hilbert made his first basket in 1970 when he was 52. That summer he visited his friends Mary-Grace and Charles Carpenter of Nantucket. The Carpenters were students and collectors of traditional Nantucket crafts and wrote Decorative Arts and Crafts of Nantucket. There were several antique Nantucket baskets in the guest room at the Carpenter’s house where Mr. Hilbert stayed that summer. Mr. Hilbert became enamored with the historical objects and he was determined to make his hosts a basket as a surprise Gift. As a fine woodworker, he was up to the challenge of this task. When Mr. Hilbert returned to Connecticut he chopped down a small oak tree on his property for the rim, staves and base, and proceeded to make a copy of the basket at the Carpenter’s home that he had taken measurements of during his summer visit. At the time he stated that the basket was primitive. 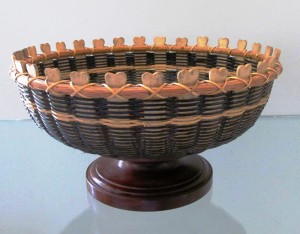 Although Mr. Hilbert began making baskets for fun and as gifts, he became well known in the basket making community for his handcrafted individuality of the inlay wood and other designs adorning his basket tops and bases. Mr. Hilbert worked with whale bone, ivory, baleen, silver, and many rare and exotic woods. Each of the one of a kind pieces that he created included a new element that was taken from his extensive skills learned as a fine wood worker. Harry Hilbert’s work was sold on Main Street Nantucket at Wayne Pratt Antiques. His baskets were the only contemporary work that Mr. Pratt sold.

Mr. Hilbert was a decorated World War II field Artillery Soldier. In December of 1944 as a member of the 106th Infantry Division, Mr. Hilbert became a veteran of the ‘Battle of the Bulge’, and the recipient of four battle stars for his service. He was one of the few survivors of his infantry, only 15 out of 75 survived. 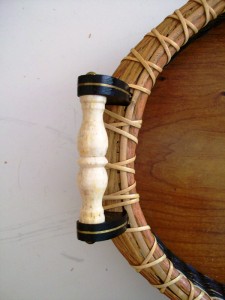 As quoted on the memory page of Harry Hilbert’s obituary, “Never one to remain idle, Harry used his retirement to learn a second career, the art of making baskets in the Nantucket lightship tradition. He incorporated his woodworking skills in the intricate inlays and turnings of his baskets, and became famous in the field of American decorative arts. His baskets have been exhibited at the Smithsonian Museum, Wadsworth Athenaeum, Boston Museum of Fine Arts and Yale. Additionally, RISD and National Museum of American History, the Nantucket Lightship Basket Museum and Wilton Historical Society have displayed his works. His work was featured in Fine Woodworking Magazine, and the New York Times has written about him on several occasions. Despite his notoriety and the respect and regard held by him in the community of professional artists, Harry was always willing to share his skills and expertise with anyone interested. He taught basket making and woodworking skills to a large circle of friends in his own cabinet shop.”