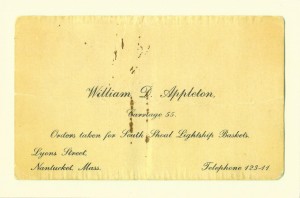 William (Billy) D. Appleton was one of nine children of Oliver Appleton of Boston and Susan Silvia of Nantucket. He made at least one whaling voyage, as a seaman in the bark Martha Wrightington of Nantucket from 1866 to 1871. He later joined the crew of the South Shoal Lightship, serving until appointed assistant keeper of Great Point Lighthouse in 1889. He is believed to have learned basket weaving from his crewmates aboard the lightship. His baskets have certain distinguishing features. The inner part of his handles, where they meet the rim, are carved into a stylized point. On the reverse of the same spot, he carved a slight chamfered edge. 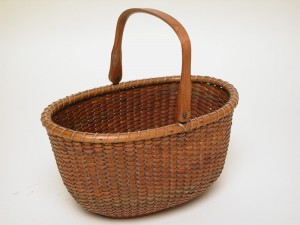 Census records from 1880 to 1910 list Appleton as a mariner, then a day laborer, and finally as a farmer, his primary employment after leaving government service. He continued to make baskets, as this January 1907 notice from the Inquirer and Mirror attests:

“Just before Christmas, Miss P. E. Clisby [who ran a well-known store on Petticoat Row] received an order from Senator Henry Cabot Lodge requesting her to secure a nest of famous Nantucket lightship baskets for him to present to Mrs. Theodore Roosevelt as a Christmas gift. Miss Clisby promptly arranged with William D. Appleton to fill the order, and that gentleman, who is an expert basket maker, constructed a ‘nest’ which would please the eye of the most critical person . . . . Mr. Appleton naturally takes considerable pride in his work, and was gratified to learn from Senator Lodge that Mrs. Roosevelt was greatly pleased with the gift.” 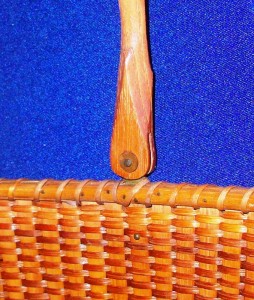