What is a Lightship?
by Robert R. Reed 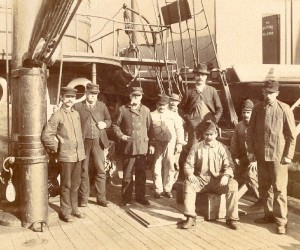 A simple answer might be: a sea-going vessel designed to function much like an earth-bound “lighthouse.” Just as lighthouses were situated to warn mariners of hazards along our shores, “lightships” were the sentinels stationed at the off-shore shoals or ledges.

The Nantucket South Shoals, extending 35 miles south of the island were of great concern to coastal shipping throughout the history of navigation off New England. The shoals were a notorious shipwreck site, with wrecks numbering 100 or more during the early centuries of American settlement. In 1843 this problem was presented to Congress in an effort to support the placement of a lightship there. The report cited that, “Many a gallant ship lie buried in one common grave.” Congress responded favorably and, as a result, the first lightship was stationed at Nantucket’s South Shoal on June 15th, 1854.

Exposed to the elements of the raging Atlantic any Lightship placed at South Shoal had to prove her sea-worthiness. Most importantly her anchoring equipment had to withstand the continuous punishment dealt by winds and swells. The first Lightship to be anchored at the South Shoals was based on a sturdy “schooner” styled hull commonly used in these waters. She had 2 masts on which, at night, large lanterns were hoisted. Whale oil lamps within these lanterns supplied the light, which at best, fog permitting, could only be seen for a few miles. In contrast, the lamps of the last Lightship, which ended its service in 1973, had an intensity of 400,000 candle-power and could be seen for 23 miles.

The first ship had a rather brief tour of duty. After just 18 months at the Shoal, her mooring failed and she was blown 50 miles to the west, where she went aground on Montauk Point, Long Island, New York. Nantucket’s second Lightship faired better in longevity but not in staying put. Though she served faithfully for almost 37 years, it is reported that she parted from her mooring at least 23 times while at the Shoals. In 1878 a Nor’easter blew her clear to Bermuda, some 800 miles south of Nantucket! She crept back to the Island without a motor, rigged only with 2 small tri-sails. Her end at the Shoals came with a final, unanticipated journey. During a blizzard in March of 1892, she parted her chain, and weeks passed without any sign of her whereabouts. Finally she was spotted grounded on a reef at Norman’s Land near Martha’s Vineyard. The crew survived, the ship was repaired and sent away to calmer waters.

It was aboard those early Lightships stationed at the South Shoals that “basket making” emerged as a cottage industry for the Nantucket crewmen. Their craft was as much a means of diversion from confinement, as it was a source of extra income. The extent of basket production aboard South Shoal vessels was unique to this isolated location. A commentary written in an 1891 edition of Century Magazine caught the desolation, monotony and discomforts of life aboard. The following are excerpts from the 1891 article.

Quoting an old whaling captain, “The loneliest thing he had ever seen at sea was a polar bear floating on a piece of ice in the Arctic ocean; the next loneliest object was the South Shoal Lightship.” An ex-captain of another lightship said, very solemnly, “If it weren’t for the disgrace it would bring on my family I’d rather go to State’s Prison. The author was also told of times when the South Shoal Lightship so pitched and rolled that even an old whale man that served at sea for 17 years felt ” squeamish”. Life on the lightship therefore presented itself to us as a term of solitary confinement combined with the horrors of seasickness.

Although, over the years, numerous lightships were moored at the South Shoals, saving many a vessel from disaster, the making of Lightship baskets aboard these guardians of the sea ended soon after the turn of the 20th century.